So we made it! And so did our cases which, given that we only had a 30 minute layover in Asuncion, was a small miracle. It’s been just over two weeks since we arrived – an intense two weeks spent finding our feet, kitting out our home, buying a vehicle, re-orientating ourselves to Santa Cruz, and catching-up with people. I’ve also managed to squeeze in some priority Novō business… We still have some more practical stuff to do (both to set-up life here in Bolivia and to close things down in the UK) but it feels like we’re turning a corner and by the end of this coming week the initial settling phase will be complete. We’ll see. First impressions? That it’s really strange returning to make home in a place which is definitely not ‘home’ but in which we’ve previously ‘made home’; that Santa Cruz is an intense, growing, gritty city with an extreme wealth/poverty gap (a gap we’re seeing with fresh eyes, not least because of our kids’ questions and observations); that getting out of the city is massively life-giving for us; that it’s a huge advantage coming back to a place we know, to people we know and love, to a language we ‘know’ but that that also means you skip the “wow, isn’t this exciting?!” honeymoon phase! What else? The weather has been rough – mainly wet and/or cold – but that hasn’t stopped the kids asking to go swimming. I got stopped/fined by the cops on Day 4 (poor JJ was sure I was going to get hauled off to prison!). The kids have already made some great friends and we’ve all had such a warm welcome from friends here who’ve stocked our fridge, had us over for meals, and looked after our kids while we’ve shopped. Phoebe has had a terrible stomach bug for a couple of days, but was super-brave about it! It seems the people who lived in the house before us fed the local strays so we’ve been plagued by ferrel cats (a mangy white one is sauntering past the window as I write…) I’m tempted to get into something more reflective on what has been an emotionally/physically/spiritually intense couple of weeks, but I think we’ll save for that for a future post! For now, here are some snapshots we’ve take whilst out and about over the last couple of days. If you’re reading this as an email you will only be able to see the photos if you read this post online (which you can do by clicking on the blue blog title above). 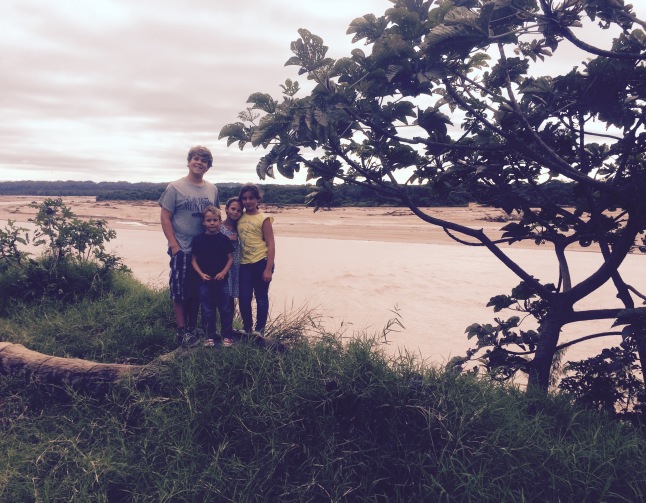 On the banks of the River Pirai

Sunday lunch at ‘La Sierra’ where they serve incredible duck… Mickey adds that they also have monkeys and parrots – not to eat though! 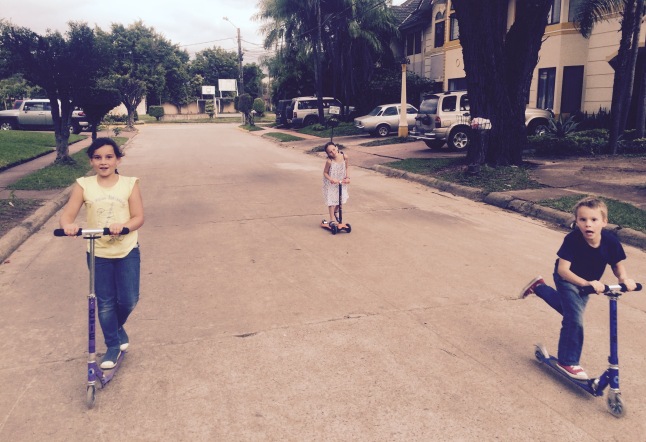 Scooting on our street

A roadside fruit seller or ‘fast fruit’ as Mickey calls it! 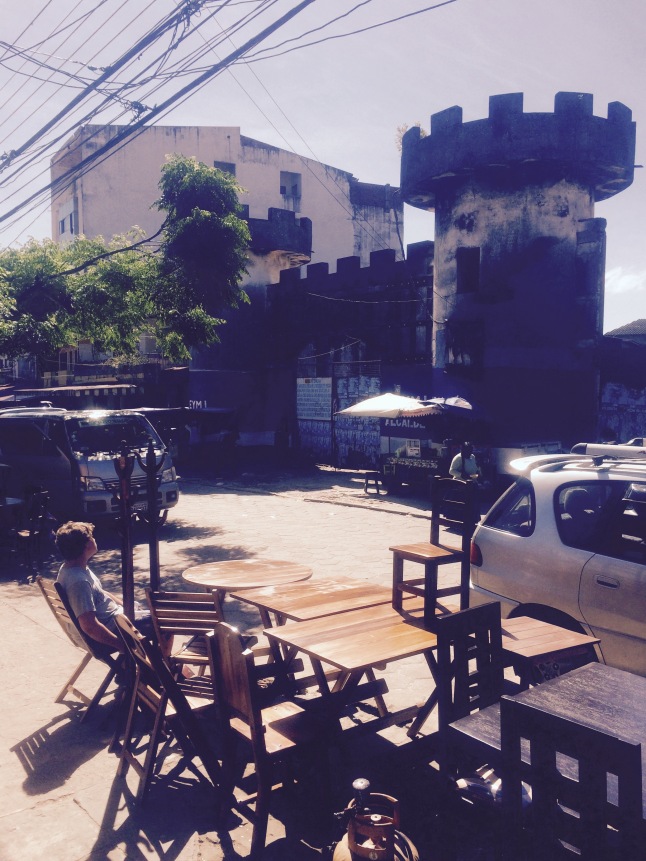 Daniel takes a rest from our furniture shopping! 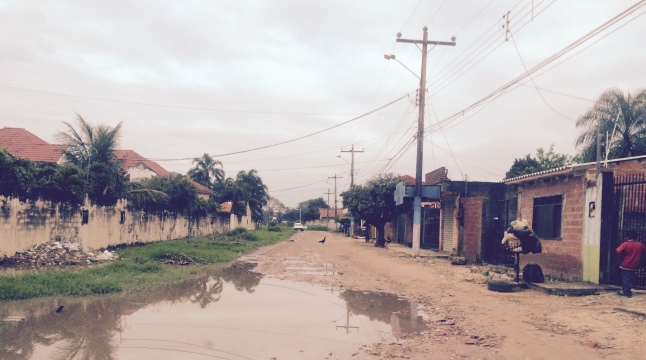 The road behind our neighbourhood

On the main road into the city 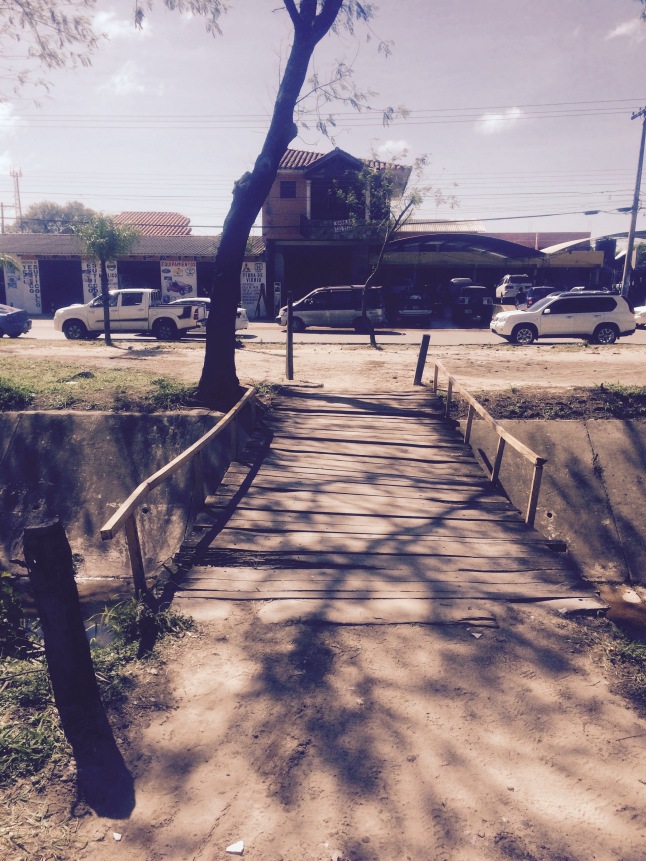 By the time you read this, we’ll likely be sitting on TAM flight JJ8085 from Heathrow to Sao Paulo. TAM is a Brazilian airline and from Sao Paulo we’ll fly to Santa Cruz via Asuncion, Paraguay and arriving in Bolivia at midday on Saturday 4th July.

It’s strange to think that we’ll be flying over Paraguay and Bolivia whilst the Yeldall Open Day is in full-swing!

All told, despite the two stops it should be an 18hr45min journey from take-off to landing – not bad compared to the 24hr+ trips we’ve done in the past via Miami. Also on the plus side, we each have a 2 x 32kg bag allowance (yep, that’s 12 big cases to haul to check-in) and the joy of knowing we got a sweet deal on the tickets!

As I write we have a couple of hours until we head off to the airport and, despite a few tensions/disagreements/outbursts there is an air of calm about the house… the lull before the storm?! Earlier, we all sat round my Mum and Dad’s garden table with an ice-cream (JJ had an orange Calippo, the rest of us had Twisters, if you’re interested…) and we took it in turns to pray, each of us sharing one ‘thank you’ and one ‘ask’, as well as how we were feeling.

It was a special and significant time – and a key moment for us to get a glimpse into their thoughts and feelings. Daniel prayed that they wouldn’t be too nervous about starting new schools; Jemimah said thank you for the ‘incredible opportunity’ we had as a family; Phoebe prayed that no-one would get poorly; JJ said thank you for his new Lego for on the plane!

It’s exciting to be at this point! After so many months of praying, wrestling, dreaming, discussing, planning, and preparing we are about to wrap-up the Introduction and begin Chapter One. As I look back over the last couple of years my mind keeps going back to a sermon Ben Davies preached at Kerith Community Church, right back at the start of this journey.

The message was based Genesis 17:18 where Abram, laughing at the promise that God would give him (a man of 100) a son through his 90 year-old wife Sarah, prayed and asked God to bless his son Ishmael instead. The message asked the question ‘Why Did Abram pray the prayer?’, a prayer for second best. Here are my notes from sermon: 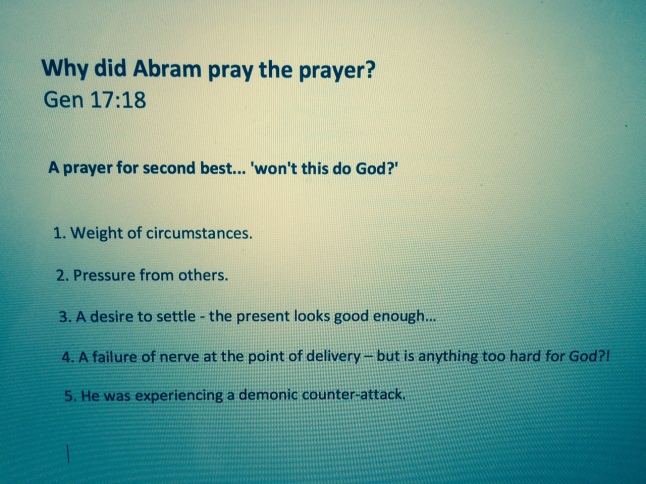 At that time (and since then on more than one occasion) we have been tempted to pray for ‘second best’, for an ‘out’ from the thing which God has called us to do. We’ve felt each of the pressures listed above but, again and again, God has affirmed to us His call to go, affirmed to us the truth that He will be with us every step of the way, and encouraged us all to ‘walk unafraid’.

We have also known the incredible love, care, generosity and encouragement of so many people so we want to say a huge thank you to each of you for the different roles you have played in getting us on the plane and the foundations laid for Novō!

PS: we’re planning be a little more active on social media once we get to Bolivia so if we’re not already connected on Facebook/Twitter/Instagram, let’s change that!

To support us financially as we pioneer the work of Novō please go to: www.give.net/20171708 or send us a message via Email, Messenger or WhattsApp!
A few highlights from our family road trip earlier in the month. It wasn’t the trip home we had hoped to make but we had fun and made great memories together!
This is what it’s all about! Two men who’d been written-off by the world, now standing tall with smiles on their faces and life in their eyes. What an encouragement to have these guys visit the Quinta for lunch today! ¡Sigan adelante, Benigno y Freddy! John 3:16-17
Day in, day out, the team at Quinta Totaices faithfully extend love and grace to our residents - to men who, having reached the end of themselves, are crying out to God for His rescue, His strength, His peace, His future. Please pray for Lincoln and Josue (working this morning), and the rest of the team, that they would know the fullness of God in their own lives, and that God’s Spirit would move powerfully - decisively - in each of our residents.

Bolivian Thoughts in an Emerging World

The Morphology of the Christian Community

Bolivian Thoughts in an Emerging World

The Morphology of the Christian Community